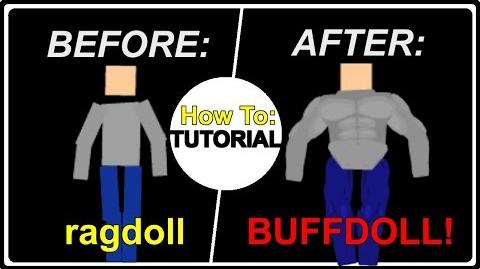 The original Buffdoll was added as an "April Fools", due to the fact it was added on April 1st, 2016. It was based on Siersciuch's fanart, Ragaouku.

The original buffdoll was considerably stronger than the average ragdoll, it also had "Advanced AI"/"Magnet Hands", allowing it to grab anything in its reach. It could also deflect bullets and had regenerative abilities, being able to return to full health within a few seconds.

(Side note: This made it harder to kill it with blunt weaponry, as the Buffdoll just grabbed it. Also, it is very hard to kill with regular and "harmless" firearms, unless if you aim for its head.)

The new Buffdoll is summoned through an Easter egg (Seen right).

It has the same model as the old, but the AI, regeneration and bullet deflection mentioned previously have all been removed.

Method #1 To spawn Buffdoll, there are multiple steps:

Also, note that the Ragdoll should be near the Memorial Tombstone and the Candlestick. Also, when typing 'buffdoll', spacebars are not essential to type, nor are cap-locked letters.

Method #2 To spawn Buffdoll, there are multiple steps:

Note: Saving buffdoll as a custom item will not work. Instead, it will just bring the regular Ragdoll but with weirder positions of the limbs and the body.

Message after lighting up the Candlestick.

Item after lighting up the Candlestick.

The more you type 'buffdoll' the chant becomes louder.

Buffdoll, summoned after these steps.

Community content is available under CC-BY-SA unless otherwise noted.